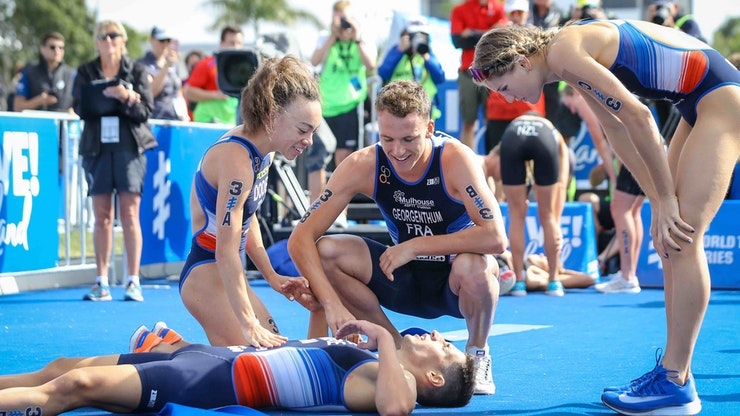 Team France became the 2018 ITU Mixed Relay U23 and Junior World Champions on Sunday following a dramatic finale to a gripping race. Consisting of Sandra Dodet, Paul Georgenthum, Emilie Morier and Leo Bergere, the team executed a near-perfect collective performance that looked to have come down to a photo finish between France and New Zealand after Hayden Wilde pushed Bergere all the way down to the wire.

A penalty for the New Zealanders after Wilde had stepped outside the course saw them disqualified, however, leaving Germany to pick up the silver and Great Britain the bronze.

“The atmosphere in the team is great right now,” said Bergere afterwards. “The competition for places makes it even better, and today I just went out to finish off for the team. At the line I was just picturing a dog chasing me down and threw everything I had at the line.”

The line-ups of the combined U23 and Junior teams were stacked with success stories from Friday’s U23 and Saturday’s Junior races on the spectacular Gold Coast course. That meant that the Mexican team led with the woman who put in an incredible run 24 hours earlier, Cecilia Alavez, while going out second for Hungary and New Zealand were newly crowned World Champions Csongor Lehmann and Tayler Reid.

From the first strokes of the swim, however, it was Hungary’s Dorka Putnoczki who took control, Germany’s Nina Eim also well placed as the first handover was made. Reid then took control of the first men’s leg, coming from behind to emerge out of T2 first and stamp his authority on the field, Germany’s Luhrs holding on to the leader for as long as he could on the run.

The third leg then saw France’s Emilie Morier deliver an unbelievable swim to catch New Zealand’s Nicole Van Der Kaay and Germany’s Laura Lindemann, and the three came out onto the bikes together and developed an 18-second lead over the likes of Portugal’s Gabriela Riveiro and Team GB’s Sophie Coldwell.

Lindemann pulled away over the last lap to give teammate Gabriel Allgayer a slender lead into the water, while Leo Bergere and Hayden Wilde battled it out together through the choppy water. After riding together for the entirety of the bike, Wilde and Bergere pulled away from the German at the start of the 1500m run, and the two then locked into a sprint finish that lasted well over a kilometre.

With nothing between them as they entered the chute, it was a desperate lunge for the line from Bergere that saw France take the photo finish and the U23-Junior Mixed Relay World title.   After the race jury overturned the New Zealand appeal, Team Germany were awarded the silver and GB the bronze.