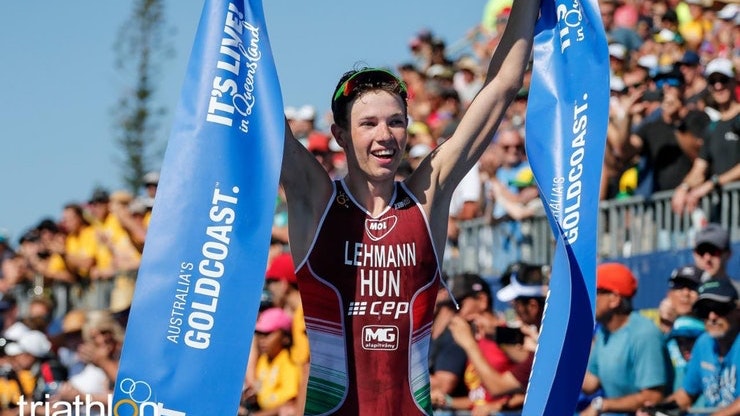 Hungary’s Csongor Lehmann continued his family’s rich triathlon tradition on Saturday afternoon on the Gold Coast, coming home to win the 2018 Junior World title in grand style. Lehmann’s father and coach Tibor was a National Champion in the ‘90s, and today watched his son crowned World Champion. Well-placed out of the water and again through T2, it was a devastating run - 20 seconds quicker than anyone else in the field - that saw him home for gold.

“It is unbelievable,” said an emotional Lehmann. “In my wildest dreams I did not expect that I could win this race… but it just happened. I made my way to the front in the swim and on the bike I hoped we would work together but it was not the best. But I was on the front off the bike and on the run I felt really awesome so I was able to drop the other guys. I was thinking my legs would be tired after they were really great.”

It was a difficult swim for the Hungarian, losing his cap and goggles early on and having to take his time to re-compose himself, but he was still fifth out of the water and quickly into a pack led by New Zealander Dylan McCullough, France’s Paul Georgenthum and USA’s Fielding Fischer.

The fast and flat 20km ride along the Gold Coast highway allowed the leaders room to take their turn leading the line, but it was Mccullough who made his move first, breaking out on his own to create a 15 second lead and looking dangerous. Leading out of the second transition, that effort looked to have taken its toll, however, and once Lehmann decided to put down the pressure early on, he dropped not just McCullough but the rest of the field that had swarmed into transition and off their bikes.

“It is amazing and for me a dream come true,” said Georgenthum of his second place. “In the last kilometre I stopped thinking and gave everything I could give to my run. Every day I thought about this place and this race and this result is amazing for me.”

“My swim was not the best so I pushed hard on the bike and I don’t know what I can say about my run,” said an exhausted Wiewald. “But it was a very hard race and I never expected to be able to run onto the podium today. At the end of the bike I wasn’t feeling so good because I had pushed so hard but on the run my legs were surprisingly strong.”