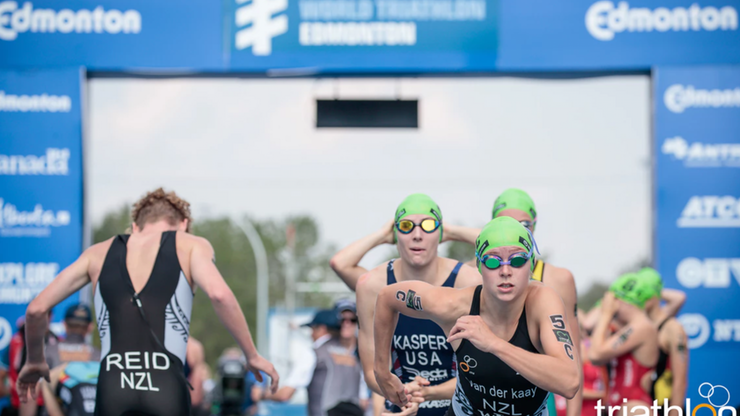 After a one-year hiatus, the time has come to once again crown the Junior and U23 Mixed Relay World Champions, with 19 teams lining up on the Gold Coast for the right to be crowned World Champions.

Last time that the title was contested, at Cozumel 2016, it was Team Spain that claimed the U23 victory, and with Antonio Serrat Seoane, Roberto Sanchez Mantecon, Cecilia Santamaría Surroca and Marta Sanchez Hernandez on board they look like fighting for the top positions once again and possibly even repeating that great success of two years ago.

They will face some stiff challenges, however, such as a New Zealand team headed up by Tayler Reid, crowned World Champion on Friday. Along with Nicole Van der Kaay, fourth in the women’s race, Hayden Wilde and Ainsley Thorpe, the Kiwis have a young but extremely strong squad that will be trying to emulate the ‘elders’ and prove they can also top the podium.

The French team packs the kind of imposing line up that we have become accustomed to seeing in Mixed Relay events this year, with Sandra Dodet fresh from a brilliant run on Friday that saw her finish sixth, posting a split time only bettered by her compatriot Cassandre Beaugrand in the women’s U23 race. Paul Georgenthum came second in the corresponding men’s race and will be a force to reckon with, particularly alongside Emilie Morier and Leo Bergere.

The USA have Erika Ackerlund out first, fifth in the U23 race, alongside Alec Wilimovsky, Tamara Gorman and Fielding Fischer, while Team GB lead with Sophie Coldwell, who arrived on the WTS scene this year with a solid 12th in Leeds. Other athletes to watch will undoubtedly be men’s U23 champion Csongor Lehmann, out second for Hungary and Mexico’s women’s U23 champion Cecilia Alavez, while Melanie Santos and Vasco Vilaca bookend a promising young Portuguese team.