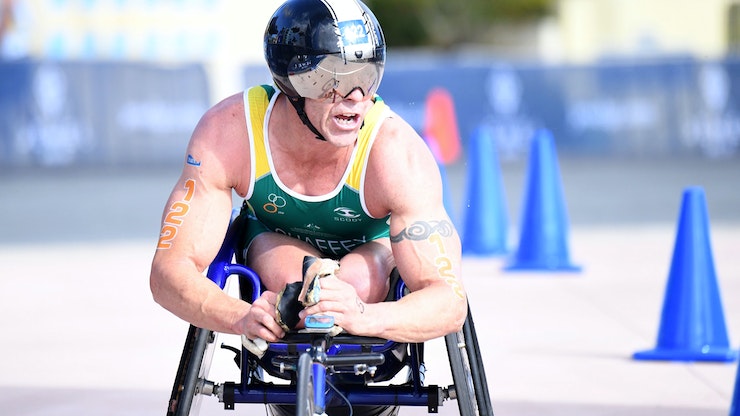 Paralympian Bill Chaffey may come from south of the Tweed River but a long time ago the Gold Coast adopted him as one of their own and when it comes to race day, TEAM Chaffey is always out in force cheering the local hero on.

The five time ITU Paratriathlon World Champion is one of the sport’s biggest names and at the upcoming ITU World Triathlon Grand Final (12-16 September) Bill will be hoping history repeats itself when he returns to the scene of his first world championship victory in 2009.

With his 43rd birthday next month, Bill is aware that the clock is ticking on what has been an illustrious career but with a new look preparation, for what could be his last tilt at an ITU World Championship, he is determined to bring his A game and has promised to leave nothing in the tank.

“I have done six world champs, with 2009 being the first, I have won five and got second in the other one. It has been a pretty good effort but I haven’t competed in the world champs since Chicago in 2015. That was the last one I raced and the last one I won, so it will be interesting to see how I fare against these young guys after a three year break.”

Any of the so called ‘youngsters’ would be well served to keep a close eye on Chaffey, who is renowned for being a big occasion athlete, capable of anything on his day.

“World Championships and events like this are always special and being on the Gold Coast it is a home country and a home town race, so that has certainly motivated me into putting more effort into it.”

“The training is going okay but it has been a little bit harder than previous years, probably based on age and integrating work with it as well. I wouldn’t say I am doing as much as I was doing five or six years ago but I am training smarter. As a younger athlete I trained with the philosophy that more is better but as you age more is not better. Even so I am certainly giving it all I can.”

“I do race at 100 percent every time I do go out there and probably the only thing I will do differently this time is that, while I will still race at 100 percent I won’t throw caution to the wind as I have tended to do in recent times. I will give this race what hopefully I have become known for, giving it everything but we will see where everything takes me at this stage of my career.”

Bill is delighted that the ITU World Triathlon Grand Final has returned to the Gold Coast and looks forward to racing in front of a loud, passionate and supportive triathlon savvy crowd from all over the globe.

“The Aussie crowd always gets behind you and particularly the Gold Coast crowd. While I do live on the NSW side of the border I have been accepted as a Queenslander during my racing career, so I always feel the support from Gold Coast people,” he said.

It’s time to gear up for World Triathlon action Queensland, Australia, as triathletes, sports fans and the wider community ride the wave to the World Triathlon Grand Final start line.

AG, Junior, U23, and Para races will be streamed for free to https://triathlonlive.tv/goldcoast and to the World Triathlon Facebook page.

The Elite races will be streamed to members with a subscription to https://triathlonlive.tv/live