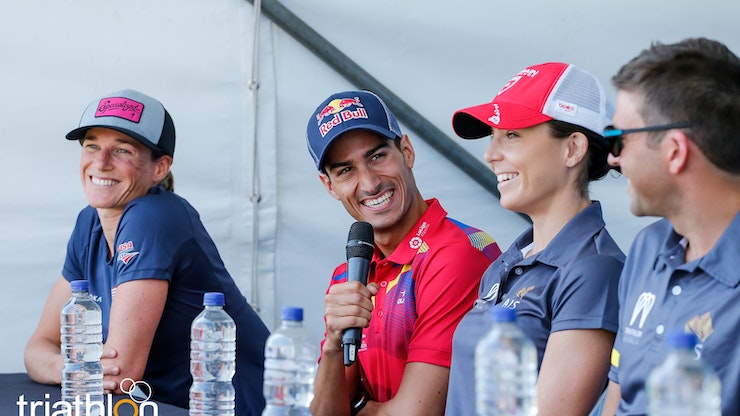 Athlete chatter ahead of the 2018 World Triathlon Grand Final on the Gold Coast, Queensland

Marisol Casado, ITU President
It is really great to be here with these great champions, it is very emotional for me. It is my third time here, I was here in 1991 and of course some of you were not born. At that time we had a fantastic world championship
Thank you very much to the City of Gold Coast, to the local organisers and of course to all of you who have come along and follow the World Triathlon Series. I think it is something very special. This is the tenth edition of the World Triathlon Series and also my tenth anniversary as the President of the international federation.
I am very happy to be here with you and I wish you all the best for this weekend.

Katie Zaferes USA
Winning the world title would be amazing, it is something that I dream of. I train with Mario and he already has a couple of stripes to his name so I would also like to join him. The title of world champion is something pretty awesome to have.
There is always pressure but I focus on the race mainly and keep that focus on the process. I think one of my strengths is being consistent. It has worked in the past and that is what I plan to do for the race this weekend.
My strategy is pretty much the same, swim, bike, run, transitions as hard as I can. With Vicky and I being so close in the points adds another element, so on the bike if she is in the same pack as me I don’t want to be doing as much work as I would normally. If it is coming down to the run I don’t want to toast my legs and her’s be fresh. Until we are in the same pack I will just be going forward and hopefully further ahead.

Mario Mola ESP
Three time is possible. Javier was five time world champion so it is possible to achieve that but it is very difficult of course. It has been a really good year for me but I know that until I cross the finish line anything can happen so I need to focus on having the best race possible.
You have to be prepared to go one hundred per cent from the beginning. I assume it will be a fast swim as it is always is but there are obviously people who will be interested in a breakaway because the podium position is still open. So people will play their own cards and I have to be prepared to fight from the start to finish. My main strength is the run so I can only contend for the win if I am in the first pack or very close to it. I know what I have to do to get there, that is why we train to get prepared for it.
In the past we have had Javier, Fernando and myself racing so we have been in a situation were it would be complicated to have anyone else make a difference to the result. Working together would always affect on or the other for good or bad. Without Javier racing it opens new opportunities. In this race I am in the best position than I have ever been in at a Grand Final so it is all about not losing the title. I just need to do an okay race but if anything happens we are prepared to fight against that. The focus is about not making mistakes and doing things as we have done in the past.

Ashleigh Gentle AUS
I am very happy to be back on the Gold Coast. I did a course famil this morning and the last time I was riding the same roads was in the Mixed Team relay which got gold so it definitely brough back some great memories.
I am from the Gold Coast and it is always nice to be back in Queensland and I couldn’t be happier right now.
Mathematically it is not possible for me to win the World Championship and be in the same situation I was last year but that is okay the highs and lows come with the sport. Importantly I still have an opportunity on Saturday to race the best that I can and get the best finishing position I can at the end of the day in the Grand Final. For me it is about this race and I will be giving it my all.

Aaron Royle AUS
To get a podium finish in front of a home crowd would be very special. The WTS started back in 2009 when I was a junior racing elite and Mario got the win. I was the youngest Australian competing and now it has come full circle and I am the oldest elite member of the team. At 28 I don’t feel that old but I am sure that the juniors are looking at me thing I am pretty old.
It will be special. Anytime we get to race at home is special because we don’t get to do that very often these days. My mum, dad and brother, friends and family are coming up to watch me race so it is a wonderful opportunity and I know there will be a lot of athletes and their support teams here to cheer us all on.

Lauren Parker AUS
It is great to be back, the weather is perfect and it brings back great memories from the Commonwealth Games and it is such a great course and atmosphere.
I was so fatigued and I wasn’t concentrating properly and I just saw the finish line. I had 50 metres to go and I put my head down but I clipped the barrier and flipped and had to be rescued. I felt like I was on my back for so long but I was just hoping I would get to the finish line in third place.
To overcome all the obstacles I have to overcome I have tried to look at the positives. Even though it has been very, very hard I have amazing support around me. I had major spinal cord surgery five weeks ago and I was off training for three weeks so I am definitely under done for this race. But I am in it to win it and I will do the very best I can.
I got rushed into spinal cord surgery because I was getting symptoms of loss of feeling down my right arm and hand and I was losing strength as well. Fluid got in my spinal cord and was going up to my neck causing those symptoms so I had to be rushed in. I still haven’t got the feeling or the strength back yet so it is something I have to deal with and overcome. Just another obstacle.
My major goal is Tokyo and the next couple of years I will be in full training to qualify and the goal is to get gold in Tokyo.

Alen Kobilica SLO
We just landed a couple of hours ago so I am still gathering my impressions and get my global positioning in my head.
There is always a chance for a medal and a chance to fight for the podium. The visual impaired category is very competitive and it is a victory for itself just to be here because in Paratriathlon there is only the first ten from the world ranking that can attend the World Chmapionship final. So this is it, from here anything is possible and can happen. I have two days to get over the jetlag and then fight for the podium.

Sally Pilbeam AUS
I am delighted to have the world championships in Australia. This I my sixth consecutive world championship so I have travelled a fair bit to get to this point to so to have it at home is special. I have a lot of family here, my two boys have come over to watch and they have never seen me race before so it is a really good opportunity to race here.
I have raced in Queensland a couple of times and it is always a great place to be, the weather is pretty good and the support we get is amazing.